DragonPurls, along with some of her internet friends, is embarking on a dyeing, knitting, and felting adventure. She wants to knit a present for a friend of hers and we decided it might be fun to dye the yarn too. For the next several days/weeks I will be documenting our adventure together.

It started with the purchase of a huge skein of Fisherman’s wool from a Hobby Lobby sale. For the sake of safety, we are using food dyes for our wool. After extensive research, she settled on the colors Lemon-Lime and Berry Blue. Kool-aid and yarn purchased, the next task is dividing the skein and winding into a nice hank for dyeing.
Here is the beginning of the process. 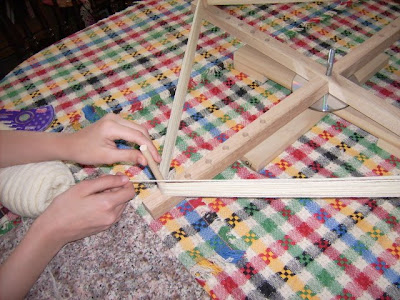 Here we are a little further along, when we had to pause to remove a tangle. 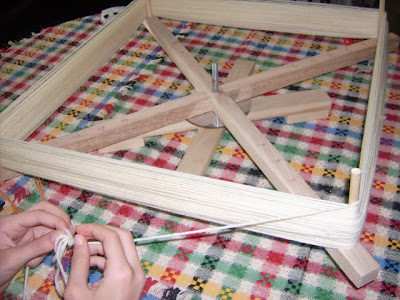 Since I don’t have a yardage meter (a deficiency I intend to correct next time Hubs wants to go to Bass Pro Shop), I had to come up with another way to divide the 465 yard skein onto two relatively even hanks. I think DragonPurls and I came up with a clever way to handle the problem.

First, I measured the distance around the pegs on the swift that my dear, sweet husband made for me. By my calculation, the distance around was about 2 yards. By calculation, we realized that 115 rounds of the swift should be approximately half of the skein. With the help of a handy dandy row counter, we wound 115 rounds of yarn onto the swift. At this point the yarn was broken and the hank secured in a number of places to prevent tangling. We then wound the other half of the skein. Our guesstimation calculations worked pretty well because the skeins were pretty close to the same weight (based on observation since I also do not have a yarn scale). 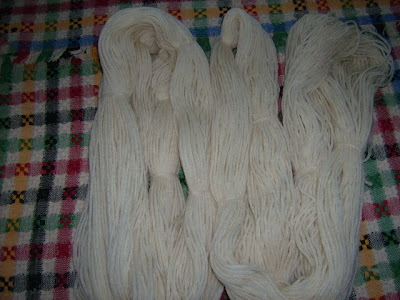 So now we have two lovely cream colored hanks of yarn all ready for an afternoon of dyeing.