Welcome back to continuing saga about lessons learned while deliberately shrinking wool.

My second lesson learned from my felting adventure is that yarn doesn’t felt evenly. You probably noticed from the results of the first part of our felting adventure that yarn generally felts more lengthwise than widthwise but again the amount of difference varies from brand to brand. For example, the blue sample had a marked decrease in length (29%) but an almost negligible decrease in width(6 %) while the yellow sample had a more even shrinkage with 36% loss in length and 28% loss in width.

The most interesting of the results, however, were the two samples of Paton’s Classic wool. The rose sample shrank less than the cream sample both in length and width but the ratio of length to width shrinkage was similar (both about 2:1 [for the math geeks the exact rations are 2.2: 1 and 1.7:1 but they both round to 2:1]). Compare this with the blue with a shrink ratio of 5:1 and the yellow at just over 1:1 and you can see that swatching for felting matters. Really, really matters. The cool thing is that if you work with 4 X 4 inch swatches before swatching, you will end up with a nice coaster after you have completed your felting. 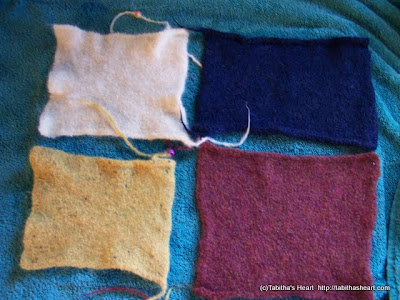 I would also like to point out that there will also be differences from side to side and top to bottom of the same sample. The rose sample, for example, shrank in width about 0.5 inch more on the cast on edge than it did on the cast off edge as you can see from the photo. Fortunately, these slight differences can be corrected in blocking so I used an average of the extremes as my recorded measurement. Still, it is rather funny to place a square piece of knitting in the wash and end up with an irregular polygon. You can see the wonky shapes in the unblocked samples in the photo.

Tune in tomorrow for the continuing drama of As the Wool Felts when we will take a look at felting times.